In preparation for the Big O Notation (Part 2) class, please review the following Big O Notation class from Mod 3. It’s not necessary to watch the entire video, but it could be helpful to skim some of the highlights including the differences between Time Complexity and Space complexity and some of the common notation equations.

We’re going to be reviewing some of the Big O Notation lesson from Mod 3, and examining some additional terminology and working through some additional interview challenges to practice high-level design and Big O Analysis.

Big O Notation is one of those topics where you’ll stand out from other candidates applying for a job, especially if you can VOLUNTEER Big O Notation terminology during an interview without being prompted.

What is Big O and what does it describe?

What is Time Complexity?

What is Space Complexity?

Which optimization should be prioritized?

Review the name of each of the following Big O Notation equations, and one example of use within an algorithm:

Write down any questions you’d like to ask when we come back together as a larger class. 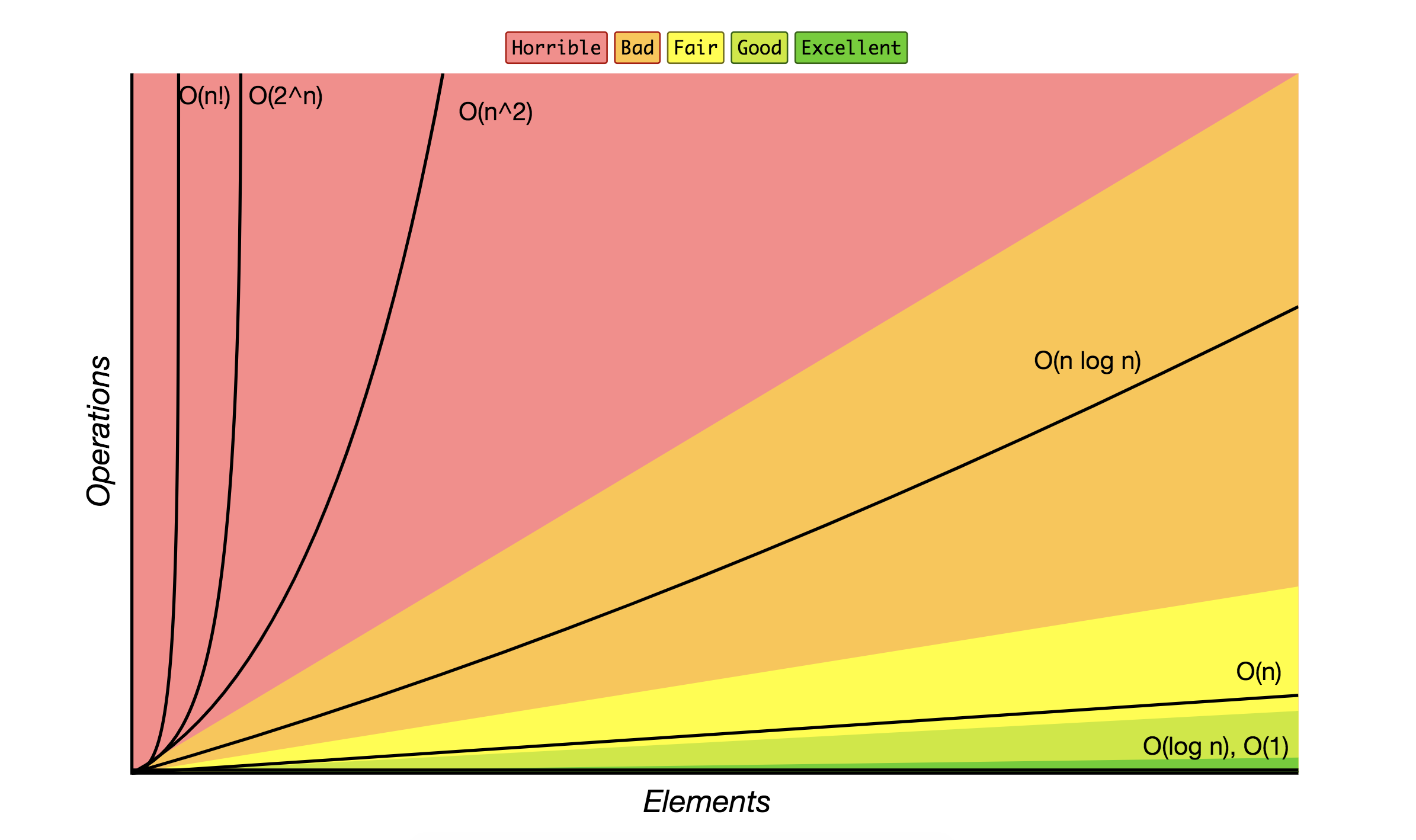 What are the factors in determining complexity?

The number of elements in a data structure are counted, and generally use “n” as an algebraic replacement for the actual number. So if we have 100 elements in an array or 1,000,000, we substitute “n” for the count of those elements when determining how much work our algorithm is doing.

Why does this matter? Take a look at the differences in the number of operations taken when dealing with the same amount of data in the chart below:

Let’s practice solving a problem at a high level and try calculating the Big O Notation of your algorithm.

There are a couple of solutions to the problem above that have various pros and cons. Don’t worry about trying to get the perfect solution. Instead, practice breaking down the problem and calculating what the pros and cons of that solution might be.

One potential solution is to use nested iterations on the array and calculate the sum of the numbers to see if they equal the target. Take note that we are not trying to write out code, we just want enough to hone in on the logic. Based on that, we can calculate that the time complexity is O(n^2) because of nested iterations. However, our space complexity is 1x due to use not having to create a new data structure.

Although there are multiple iterations happening here, none of them are nested keeping the time complexity as linear, O(n). However, because we want to create an object/hash this will increase our space complexity to 2x.

If the number of teachers is 10, and the number of students is 100, those sizes aren’t too different. In this case, we could say the algorithm is O(n^2).

However, let’s say there are only 10 teachers for 10,000 students. Now the numbers are significantly different, by several “orders of magnitude”. In this case, we would use “m” to represent our smaller data set, the teachers, and classify this algorithm as O(n * m) – which is more than Linear Time (O(n)), but less than Quadradic Time (O(n^2))

For each new item, “n”, the growth of work doubles.

This algorithm is typically built using recursion where we want to find the “N-th” number in the sequence. For example, what is the 30th number in the Fibonacci sequence? (the answer is 832,040)

In this sequence, each new “N-th” number we want to find needs TWO function calls to the fibonacci() method to calculate the answer.

Let’s practice another problem at high level and try calculating the Big O Notation of your algorithm.

Although this could by a 10x10 array or even a 1000x1000 array, always focus on the easiest/smallest test case scenario first and then expand to larger and more complex datasets.

One solution might involve spiraling around the array clockwise using nested iterations. As a result the time complexity would be Quadratic, because we would need to spiral until there were no more numbers left in the matrix. Because I am creating a new array to keep track of the list of numbers, the space complexity is increased to 2x.